I am sitting here this morning, struggling with the idea that I may be coming down with the flu??  I have stomach cramps and a sense of dis-ease coming over me in waves.  I have no way to know whether it will increase and send me to bed or lessen and leave me able to go to work later today. I do not get legit sick very often.  I think my body knows how afraid I am to actually succumb!!

This was, for the most part, a great week.   My weight has fallen a little each day and I have been toeing the line with the Arbonne program. Yesterday I counted as a wobble.  I had not had either of my shakes, so decided to have Chipotle with Little Lovely mid afternoon as the only time I ate all day. It was a deliberate choice, and I won’t make it again.  I just need to stick with the hard, fast rules of two shakes a day and a clean meal at dinner. If nothing else, I crave the peace of mind that affords.

So on Wednesday when I weighed in I had lost a total of 9.4 pounds for the week.  WOW. Looking back to my highest weight, this gives me a total loss of  43.2 pounds to date.

I have enjoyed the Arbonne program and actually find it fun to see how I can switch up the two shakes each day. Ingredients like shredded coconut, sesame oil, frozen berries, chia seeds (left to congeal for a bowl more than a shake). So many options. And I like the regiment of a shake for breakfast and lunch.Honestly on a lot of days I have a double shake somewhere between 11 am and 2 pm, slowly sipping over time. That works for me, as I like to lengthen the fasting window as much as I can !  Along those lines, I have not eaten since before 3 pm yesterday.  So maybe some of what I am feeling is legit hunger??

This week I sent in an Amazon order for a list of necessities.  Spurred by the need for ink in the printer, I ordered that; some food items for Little Lovely now that school is about to begin for the semester; a set of diffusers (more on that below); and batteries for the key fob for my car. And that last item comes with a funny story  for sure.

I knew the battery in my fob was getting low. there had been times when I had to repeatedly press the button before the doors would lock or unlock. And I knew there was a new battery in my glove box when it finally died. But oh the events that crashed together when it died!

It was a snowy day and I was grocery shopping for an elderly woman in town who is home bound. At my last stop, I had to lock the car manually by using the key hidden away inside the fob. When I got back out, I did the same, manually unlocking it.  Sitting in the car I could not figure out how to open the fob to install the battery. Oh, but You Tube would guide me, right? 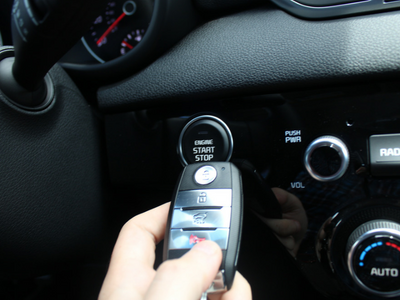 Knowing that the fob stores enough juice to start the car, I touched the end of the key to the start button in my car and it started. I plugged in my phone and googled, “How to install a new battery in the Key fob of a Hyundai.” Sure enough, up it pops.  They recommend using a butter knife?? Another item now safely stored in my glove box!

But I managed to wrestle it open and install the battery even without the requisite butter knife! Car on. Heat on. Fob working. Let me tell you, on a cold snowy day, this took almost an hour.  But it was tackled with calm and collected actions.  My old self had the tendency to FREAK OUT sometimes and tackle things with wild abandon.  But knowing my word for this year is peace, I decided God was allowing me to test it out.

Diffusers. I am an oily lady for sure. I have three diffusers going in my house almost all the time and swear by everything Young Living. Their oils line my shelves from the kitchen to the bathroom to the laundry room to the bedroom.  My kitchen diffuser is only sometimes working.  It is the oldest and has been serving me well for 5+ years.  I saw on Amazon that I could get a two pack for just a small amount more than a single diffuser, so the extra will become a bathroom resident, the only area without one currently. I had to laugh at my thought the other day that a tiny house might be big enough for two, one at either end!!

Been very cautious with my budget.  I have a new furnace…yes, a couple days heatless in the winter builds character…and I am confident that a new energy efficient unit will use less gas and electricity than the 39 year old unit that was replaced. Yes, the old adage, “they used to build things to last,” is constantly being proved correct in my little duplex where the  landlady is finally starting to replace things after almost 40 years. I still have many original kitchen appliances!

My monthly extra, created by finishing a capital campaign at church to build a new wing, has been reallocated to my loan payment and will have that finished before the end of the year, instead of September of 2020.

This morning I read a passage of Scripture that took on a whole new meaning for me this time around.  It is a very familiar passage for many – the story of Jesus calming the storm on the Sea of Galilee. There had just been some teaching going on at the lakeside.  Jesus and his disciples got in a boat to cross to the other side.  It was evening and as they got ready to leave, Jesus told the disciples, “Let’s cross to the other side of the lake.” He expressed His intention of them reaching the other side of the lake. In Mark 4, it is also noted that other boats followed them (vs 36). So when the storm begins, it isn’t just Jesus and his disciples in their small fishing boat, it is also many others also experiencing this storm. The storm is said to be fierce. The waves, high. The boat is filling with water and the disciples, and maybe many others around them on the sea, are filling with great fear.

Fear that causes them to shout at Jesus, “WE ARE GOING TO DROWN!!!”

Jesus speaks. The storm subsides. The disciples are in awe. They remark, “Who is He that even the wind and waves obey Him?”

Life always gets stormy.  Sometimes mild storms that last a short period of time. Sometimes hurricanes that threaten to derail us completely. But, we know that we will still get to point B as planned. Because God says.

God controls the wind and waves, every aspect of our storms.  But I find it interesting in this story that He doesn’t calm them until He is asked.  Jesus was fully God and fully man. And the fully man side of Jesus would NOT have been asleep in that boat as he was pummeled with water and violently rocked back and forth. He was waiting for the disciples to say, “Help.”

Once they did, the waves and wind subsided. But it doesn’t say that Jesus bailed the boat, or that He miraculously caused the water that had collected to disappear. The disciples, and you and I, still have work to do to correct things once storms go away.  And I feel like the storms that are self-made have bigger messes to deal with than some others might. I automatically think of my issues with food.  The storm has calmed, but I have a large mess to deal with still.

And those other people in those other boats?  Well they were caught up in my storm for no reason of their own.  Sometimes others get caught up for a reason. And sometimes we may suffer consequences for the storms of someone else. And the worst part, it is sometimes hard to tell which it is?? But these folks, through circumstances out of their control, now have boats to bail and issues to resolve as well.

Our poor choices are never about just us.

Sometimes God uses one life to affect another, so that two lives learn lessons at the same time.

When your friend needs help with their drama, that helping will cause her waves to wash over you as well, and God may show you something He needs you to deal with. That is the entire reason He asks us to walk alongside people. We are either in a  helping position or a learning position.

Christian phrases sometimes annoy me, but after studying this passage in Mark 4 and praying a lot, I thought of this: Life isn’t about waiting for the storms to pass; it’s about learning to dance in the rain. When the storm is past and there is still a lot of water to bail out of that boat, the chore might seem a lot less daunting if you could learn to dance. Learn to praise the Lord with upraised hand and heart as you slog through the aftermath of your storm.